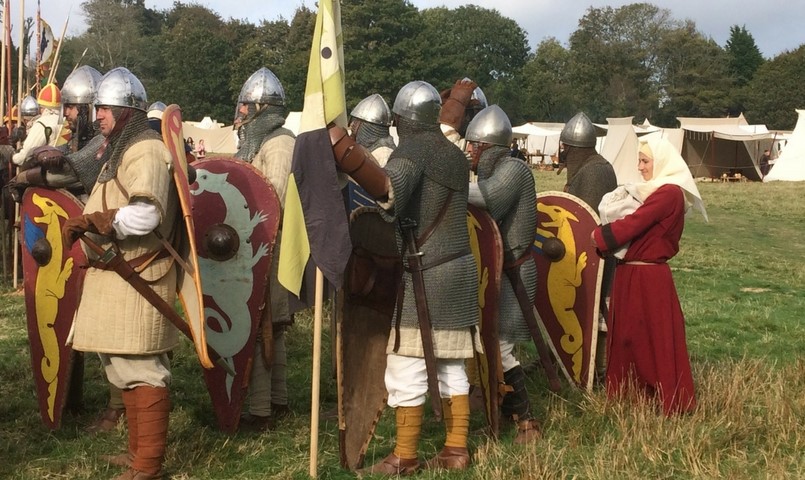 Royals in the News

It's Royal season on the TV Channels with mega-celebrations this centennial year of the Battle of Hastings in 1066 where the Anglo-Saxon King Harold was killed by the Norman Invader William the Conqueror.  Three thousand re-enactors from across the world came to spend the weekend reliving the battle, at Battle.  Swords clashed, arrows flew, horses charged.  As usual the crowds cheered King Harold and boo'ed William.  To no avail.  The Normans won.  Again.

This battle revolutionised England's laws, culture, language and installed a ruling class who's descendants still hold vast swathes of the land.  Celebrated, or commemorated, in the Bayeux Tapestry depending on your nationality, the 21st century clash filled our news bulletins.  We had armies marching from York in the north down to Battle in East Sussex in the week before, stopping off at schools and clubs to talk about the sequence of events and inspiring others to learn more.  Then the battle itself, 3,000 men and women fighting and enjoying the camaraderie of the day, displayed for all to see on our screens. Shortly thereafter, we launched into a TV series about the young Queen Victoria swiftly followed by young Elizabeth II on Netflix.  It seems the world can't get enough of our Royal Family!

It was always thus.

True some of our minor Kings and Queens don't quite make the global stage - who remembers Ethelred the unready! but these are overshadowed by those who dominate.  Henry VIII, Anne Boleyn, Elizabeth I from the glorious Tudor Age.  They brought a rich mix of intrigue and passion, love and betrayal, greed and devotion.  They generated stories which captured people's imaginations then and still do today.  What stories will we have to tell our visitors in 2017 I wonder?